There has been quite a bit of rain across the peninsula over the past 24 hours including at Busan which is where Friday’s racing takes place. There are 9 races from 11:30 to 18:00: 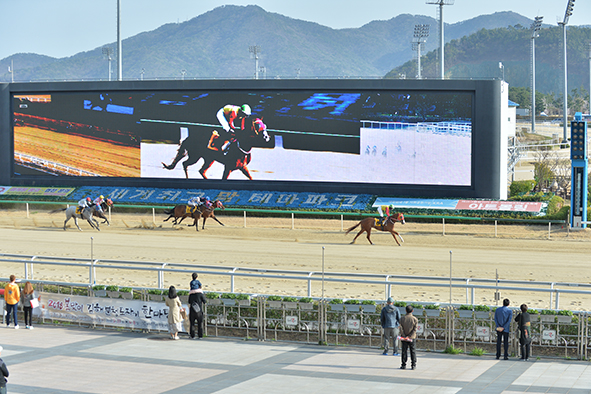 (7) PAGEUKCHEON has finished 4th in both starts so far. Bart Rice’s colt should be on speed from the gate and is favoured to make his breakthrough today. (11) CHOEGANG WINNER ran an improved 3rd last start and while he has drawn wide can continue to make progress today. (1) NEOLBEUN GOEUL raced three times without distinction last year but returns following six months off having looked a different horse when winning a trial in a fast time at the end of April. He’ll be expected to go well first-up here. (5) LUCKY TOGETHER and (10) ARA MYUNGMA are others who can improve in a weak race.

After an inauspicious debut at the end of last year, (8) BARAMGWA GUREUM has run well in three subsequent outings, all at this trip. He was a touch disappointing when finishing 5th as favourite last time out but looks worth another chance here. (10) SPERO SPERA was the longest shot on the board that day but managed to finish 4th, half a length in front of Baramgwa Gureum. He’ll warrant more respect today. (9) FUNKY struggled at 1300M last start but should be better dropped back to the minimum today. Debut-makers (1) THE SUN OF GOD and (2) FOREVER RUNNER did nothing wrong in trials and can be competitive here. Watch the market with both.

(5) LEGACY returned after over a year out to run 3rd at this distance on May 17th. He was favourite that day but should have come on for the run and should be sent off at the top of the market here too. He should lead all the way. (1) FINAL WIND has a 2nd place to his name at this trip and is set to be one of the principal dangers while (12) ACRA improved last start and looks ready to try this extended trip once more. (10) HIDDEN BOY steps back in distance after a solid showing over a mile last start and should be in at least placing contention while (6) NOVELLA races for the first time since last November and showed some promise over the course of a couple of recent trials.

Three-year-old maidens only here. (11) HUSE JEWANG is the slight pick. He’s shown steady – if somewhat sedate – progress across three outings so far and could be the one to step up here. Plenty of other candidates too. (9) TIZ JOYFUL was an improved 4th over 1000M in decent company last time out, running on well, and should appreciate the step up in trip today. (4) GEUMGANG CHILBO ran poorly last start in April but has since been through two trials in eye-catching fashion and enters consideration. (3) TIZBE and (7) CHARGE POWER are others in the hunt.

(1) LUCKY NUMBER ONE is up in class having made all to secure her second career win over a mile two weeks ago. Intriguingly she’s dropped all the way back to the minimum distance today but she’s a front-runner who can get forward from the inside and can win again. (3) HALLA HWANGHU also steps up in class following an eye-catching five-length win over this distance on May 10th and should be firmly in the hunt again. (7) LUCKY ADELE was 2nd that day and comes u in grade as well with the potential to be competitive. Continuing the theme of those taking on class 4 company for the first time, (5) BLACK SHIELD returned from nine months off in March to make all and win over 1200M and looks very nicely in here. As for those with experience of this level, (2) BUGYEONG STORY looks the best of them.

(5) HANSEN DREAM was a battling winner over this distance on debut on May 3rd. He’s up in class today but is nicely drawn to get on speed from the start and could win again. The main danger is (4) KAHEKILI. She led all the way to win by six-lengths on what was just her second start a month ago and looks to have potential for more. (10) YEONGSEONG STAR enters with recent form reading well and beat a couple of these on her way to 3rd place last start. She needs to overcome the widest draw but looks to have placing claims. (1) JIGYRYEOK PALPAL and (7) HOPEFUL SIMON are others in the frame.

(7) ROSE BULLET got his maiden win on his fourth start at the end of March. It came at 1300M, but his style has suggested he will run well at further and he gets his chance over a mile today. He’s up in class but looks the one to beat. (8) KARIN and (2) YEONGBONGSAN are both up in class too having finished 1st and 2nd respectively at this distance on May 10th. Both should be competitive here. (1) KWAEHAN SINGANGJA was a class 6 winner in January at this distance. He weakened on his first try at this class in April but can be given another chance today. (6) ACE JILJU looks best of the rest.

(11) KINGSTON HARBOR was a seven-length winner at class and distance on May 12th. Gate 11 shouldn’t be too much of a problem for him here and while he carries an additional 4kg, he looks to have every chance of scoring once more. (8) GIANT’S BIZ got his maiden win two weeks ago over 1200M. He’s up slightly in both trip and weight today and will be the main danger. (2) MAGIC STREET comes in following a useful 4th place at 1200M in April – he actually beat Giant’s Biz that day on what was the latter’s debut. He can go close here. (1) B.K. GAMBOL was a good winner over the distance four weeks ago and steps up in class today. She’ll need to improve but looks capable. (5) EOROK is best of the rest.

It took (2) ALPHAKING IJI a couple of goes to figure things out but he’s won his latest two well and while he’s up in class as a result, he looks a progressive type who should be able to cope with the additional distance today. Also looking for a hat-trick of wins is (11) BRAVE KINGDOM. He perhaps has a little more to find but was a good winner over a mile last time and is nicely weighted here. (7) GIANT HOLD and (9) U S MAN were 1st and 2nd when they raced each other at class and distance on May 12th. Neither were especially fancied that day, but both should get more respect here. (3) MALIBU BYEOL was beaten by U S Man on his latest start in April but has potential for improvement and is another who could well take to this distance.