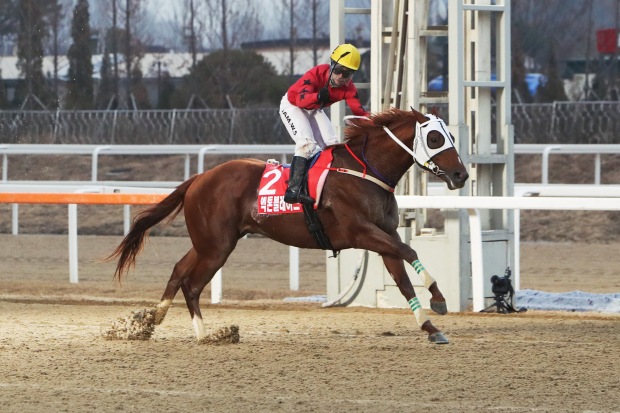 While the Derby was at 1800M, the pair look set to be pointed at shorter distances for the foreseeable future. After winning May’s Classic, Ecton Blade ran 3rd in the final leg of the Triple Crown, the Minister’s Cup over 2000M in June, but found older horses at that distance a completely different prospect when 9th of 16 in the President’s Cup last month. However, between those two races, he returned to Busan and dropped back to Sunday’s trip of 1400M to record a comfortable class 1 victory.

South African jockey Francois Herholdt will get the leg-up on Ecton Blade in Sunday’s race 5 and the colt will be favoured to prevail with the likes of Morning Daero and Daeho Sidae likely to provide the stiffest examinations.

As for Mask, he ran 4th in the Minister’s Cup before having a couple of near-misses around two turns in September and October. A month ago he dropped back to 1400M and returned to the winner’s circle, taking out a class 2 handicap by three-lengths.

Sunday will be Mask’s first try at class 1 and it won’t be easy as he meets Gangtoma, a winner of six from ten, and who, like Ecton Blade was an also-ran in the President’s Cup but should pose a much sterner test this time. Track record holder for the distance Sanggam Mama is also among a competitive field of twelve who will contest the concluding race 12 in the capital.

Earlier at Busan, New Legend will get the chance to show what he is made of. Though Korean bred, the Menifee colt began his racing career in the United States, winning a maiden special weight contest at Arlington Park in July. The three-year-old returned to Korea in the autumn and was an easy winner over 1300M three weeks ago. In Sunday’s race 3 at Busan, he steps up to 1800M and runs straight into the in-form Challanhan Miso for his first real local test. He will be expected to come through it.

(6) K ZONE may be a fourteen-race maiden but recent forms reads well and having been knocking at the door for some time now, he could go through it today. (10) ROAD WOMAN also looks to be figuring things out and comes in after a career best 3rd. She should be on pace early and can go all the way. (3) AQUA STROM returned from five months off to run a good 4th a month ago and should be in the hunt. (1) MEGA CITY and (4) A ONE HAMMER others who should go close.

Juvenile maidens here and only four of the twelve have raced before. Three of those four look promising though including probable favourite (2) DIA PARK. She ran 3rd on debut at this distance a month ago, having led early. She’s well drawn to lead again and this time may not be caught. (12) MENI STAND overcame some heavy bumps at the start to run 4th on her first outing and can build on it today while (5) GEUMSEONGHWANGJE ran a solid 5th first-up in October before weakening over 1300M on reappearance three weeks ago. Back at the minimum trip today, he’ll go better. Of the first times, (4) SANGGAM CHEONGJA looks the pick having won a trial in good order although (8) DAECHEON VOW also showed some promise.

Juvenile imports chasing a substantial prize here and there’s a proven winner among them. (10) CATS MIRACLE led from gate to wire over this distance on debut on November 10th and is favoured for a repeat today. (9) DONGBANG JIJON and (5) PRO HAMSEONG came home 3rd and 5th respectively when they raced each other at 1300M on November 18th. It was the latter’s debut, and both should be contenders here. (2) TRIPLE KHAN has run 5th and 3rd in two outings to date and is well drawn to lead and continue his development. There are two first-time starters and of them, (8) MIGHTY M looks best having caught the eye in two trials to date.

Maidens here and (7) STRIDE UP comes with a pair of 4ths and a 2nd from three starts to date. He steps back to the minimum trip here and looks to be the standout by some margin. (8) FIRENZE HILL has hinted at some ability across two efforts, both at this distance and looks to have potential to step up but the rest of them will need to show something they’ve so far kept concealed if they are to challenge. (6) MAX THUNDER does have a couple of 3rd place finishes to her name and while she put in a poor effort last time, she’s had a couple of months off and trialled up adequately since. (9) HAE WANG END_OF_DOCUMENT_TOKEN_TO_BE_REPLACED