World Sun, the hard-luck story of both the KRA Cup Mile and the Korean Derby, finally tasted Classic glory coming through with a late – and this time unimpeded – run to win the final leg of the 2018 Triple Crown, the Minister’s Cup, at Seoul Racecourse on Sunday.

Under Choi Si Dae, the Officer colt was taken right to the back of the field from the gate but this time, unlike in both the Cup Mile and the Derby, World Sun managed to find a clear run in the home straight and overhaul 80/1 long-shot Sharp Kaylan in the final strides. Korean Derby winner and odds-on favourite Ecton Blade was 3rd.

Sharp Kaylan set the early pace but it was a sensible one and jockey Lee Chul Kyung looked somewhat surprised to be four-lengths clear at the top of the stretch. Ecton Blade meanwhile had to ridden along by Franco Da Silva around the home turn. He would come into contention briefly at the top of the stretch but ultimately was out of it by the furlong pole.

Unlike in the Derby, when he found himself in between two horses coming together and blocking his route, this time World Sun found clear track in front of him and it came down to a final furlong duel between him and Sharp Kaylan. The Busan horse was too strong  though, going past to win by half a length on the line., Sharp Kaylan’s jockey Lee Chul Kyung emitting an anguished howl as they crosses the line in recognition of just how close he had come to riding his first Classic winner.

Kim Young Kwan missed out on training the winner of all three legs of the Triple Crown – Ecton Blade’s stablemate Captain Force could only manage 5th., one place behind Derby runner-up Mask. 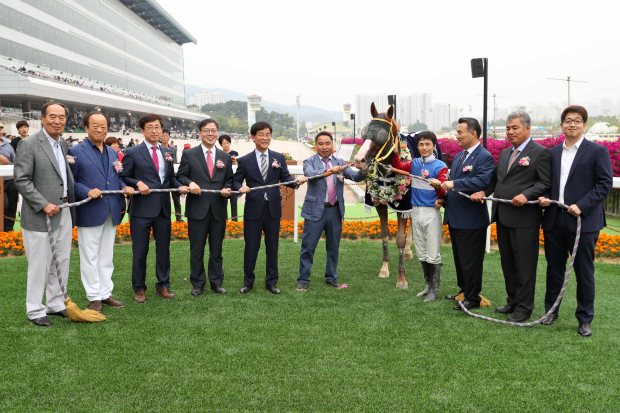 For trainer Baik Kwang Yeol it was a second success in the race and came ten years after his previous win when Gaeseon Janggun scored in 2008.  He also won the Derby in 2015 with Yeongcheon Ace for the same owner as World Sun, Lee Jong Hun., who also owns Group winners Beolmaui Kkum (who was trained by the same trainer) and Success Story (with Min Jang Gi).

Jockey Choi Si Dae was winning the race for the first time to go along with previous wins in the Korean Derby, Korean Oaks, Busan Mayor’s Cup and Grand Prix Stakes.

So three Triple Crown legs yielded three different winners.  With a win an 2nd and a 3rd, Ecton Blade is the overall “winner” of the series, Now we’ve got the rest of the season to find out who’s the best.