This weekend’s big race is at Seoul on Sunday and the Owners’ Association Trophy but things kick off at Busan on Friday with 10 races from 11:30 to 18:00. Here are the previews: 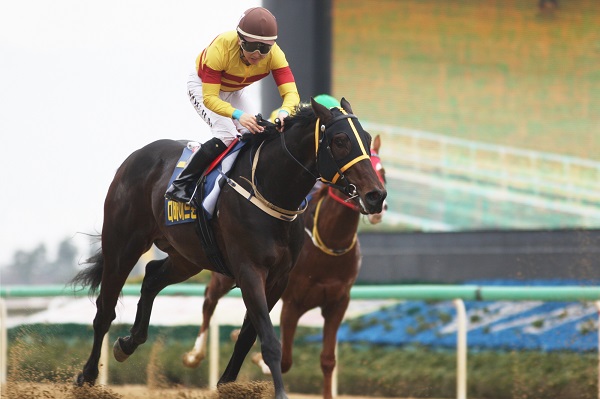 We’re probably going to be seeing this picture a lot over the next month – Busan’s Divide Wind heads the 3yo ranks after his victory last Sunday (Pic: KRA)

Wide open maiden to kick things off with half of them racing for the very first time. We’re going to side with experience though and (12) HOTHAE, 4th in his latest two, both and this distance and showing a bit of improvement on each occasion is the slight pick. He was actually beaten on debut back last December by (4) TANGO AND TANGO and the latter went on to run a good 2nd five weeks ago again at this distance and she looks to be the main danger. (9) MAJOR ANGEL showed signs of potential talent when an improved 5th on what was her second start at the end of January while (8) KKEUTPAN TURBO races for the first time since last September and acquitted himself well in a trial three weeks ago. Talk of trials brings us to the first-time starters and among them, (6) PARTY WINNER looks most promising.

(3) HEUGSEOL GONGJU is the one to beat here with her 4th place at 1300M on February 9th a bit more impressive than the performances of the others who come in off promising results. She can settle just behind the early speed and finish strongly. (2) MY TIME was 3rd last start, also at 1300M and has every chance of at least matching that. He’ll likely run with similar tactics as Heugseol Gongju. (1) B. K. MARINE finally showed some ability last start and steps back up in trip today – she will probably be looking to lead from the gate. (4) BAEKDU QUEEN and (11) BELLAMY GONGJU others who could go well.

Kim Young Kwan’s (7) SPOT wasn’t especially well-backed on debut after an underwhelming trial but he ran pleasingly enough on debut despite getting into a bumping match coming into the home straight. He ran on for 2nd and could well go better here stepped up in trip following nine weeks off. (4) VIP KING is the other one who’ll be at the top of the market. He’s raced five times so far with his best being 2nd place at 1000M in January. Last time, he ran a solid enough 4th at this distance, beating a couple of the others who go here. He’s drawn better today and could well lead all the way. (2) GRACIELA didn’t go well at this distance on debut but looks ready for another crack at it following back to back 4ths back at 1000M. (6) PYEONGCHANG HORANGI and (8) BAEKDU MYEONGWOL are two others who have hinted at ability.

(8) BULMYEORUIMARIPGAN established himself as a worthy plodder who while slow, sticks to his task admirably, and over the course of a mile stays on so well that he inevitably passes plenty in the closing stages. Since returning from five months off in January, however, he’s run 3rd and 2nd and comes in today, against a set of horses who, for the most part, he has already beaten, and he has to go on top. (4) DAEHO MYEONGGA END_OF_DOCUMENT_TOKEN_TO_BE_REPLACED