It’s the showdown that we’ve been waiting for. At least for the past three months anyway. It was disappointing that both Clean Up Joy and Cheongdam Dokki swerved the Korea Cup last month but they finally do meet at Seoul Racecourse on Sunday, taking top billing in the local Group 2 KRA Cup Classic. There are 11 Sunday races at Seoul from 10:45 to 18:00 and 6 at Busan from 12:40 to 17:10. 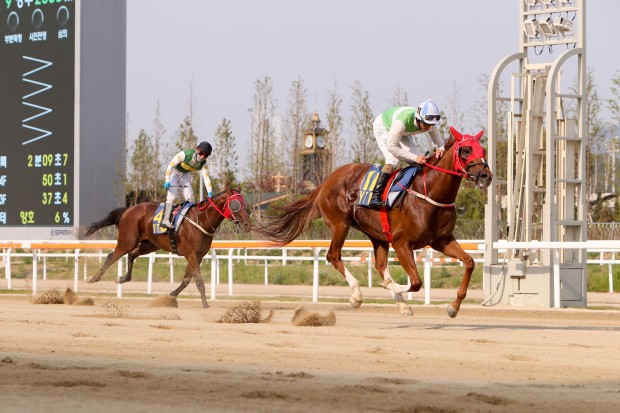 Clean Up Joy beat Shamrocker in the YTN Cup earlier this year – he’ll have more than just his stablemate to deal with today (Pic: Alex Cairns)

Twelve fillies to kick things off and this looks a slightly softer ask for (3) P.K. TIME than when she could only manage 3rd place when favourite over 1000M on September 9th. This is her first try at the distance but she should be at the front early and can go all the way. (5) FOR J.K and (10) FIORE finished 3rd and 4th when racing each other over 1200M a month ago and both should be competitive here with Fiore fancied to overturn that form while the more experienced (12) DONGSEO GADEUK should be getting close in this company too. Similarly experienced, (7) STORMY PASSION is another to take into consideration.

Juvenile race with enhanced prize money sees seven of the twelve racing for the first time. However, it’s from those with experience that we draw our top picks. Both (2) GLOBAL BANK and (3) THE JIJON came home in 2nd place on their respective debuts in September and it’s The Jijon, who led until the closing stages over 1200M, who is favoured to score here with Global Bank having to settle for 2nd once more. They’re both likely to be on the early pace. (10) PENETRO also put in a promising debut, running 4th in August and returns after nine weeks off while among the first-time starters, (7) BOLD SHINING looks to be the pick.

Back to fillies only (and one mare) here and (5) SIMON MISSILE, 3rd and 2nd in her two efforts to date at this class looks very much the one to beat. She’s not always the fastest of starters and her one win to date was at 1300M but she could well have too much for these. (2) AREUMDAUN SOPUNG, (6) FANTASTIC QUEEN and (10) REBECCA are all up in class following maiden win last time out and while Rebecca possibly as a bit to find, the other two should be in the frame here . Yet to break her maiden, but a proven place-getter at this class, (9) JAESEONG GUNJU is also not to be ignored.

An eye-catching ten-length winner on debut on September 30th, (1) NIKE STREET is up in class and slightly in distance too but is very hard to oppose here. If he gets away well, he shouldn’t be beaten. (4) DONGTEUL TTAE got his maiden win at class and distance last time out and should join the favourite on the early speed and can go well again while (6) CONTRAIL could only manage 5th on his first try at this level following an equally eye-catching debut to that of Nike Street, but it was over 1700M and he can be given another chance. At the other end of the experience level, (7) GONSEOL may never win a race but can come close in this company while (9) SKY BIG was 4th behind Dongteul Ttae last time out and can look to match that today.

Usually in races such as this where we have a few debut-makers going up against several who have raced before, we go with the experience. Not here though. Stephen Got Even colt (10) MORFHIS was a $150K purchase from Ocala this Spring and looked the part in a trial just last week. His debut here under champion jockey Moon Se Young is eagerly awaited. Another first-timer, Currency Swap filly (11) LOVE IT was nowhere near as expensive but also looked good when strolling through a September trial and she’s second choice. (1) BLUE WOLF and (6) HAPPY BOY make it four out of four of the debut-makers with chances. As for the experienced ones, none of them exactly set the pulse racing. (3) LEADING RACER has shown the most of them so far.

Plenty of competitive types on display here but, having won a similar class and distance race on September 17th, (2) BEST TEN is the pick. She’s won two of her last three now and can set up camp just off the early lead and finish strongly. (1) BOMBI’S KING is up in class following a maiden win last start and should lead from the gate  and stay on while (10) SAEBYEOGI was 5th behind Best Ten last time out and can get closer today. (4) ACE SEVEN is another up in class but with claims while (12) GEUMGOKSEONG has a 2nd and a pair of 3rd places from three attempts at this level and should be challenging for the places again.

Tricky contest this with any number having claims. However, (7) GEUMA FORTE’s class and distance win on September 10th is just about enough to tip the verdict his way. He was given a patient ride that day and similar could see him home once more. (2) REAL GULCH has developed a severe case of “second-it is” recently, having been runner-up on four of her last five outings, two of them at this distance. She can repeat today. (1) JEULGEOUN HAMSEONG and (3) CHEONHA JEWANG move up to this trip for the first time but both look competitive, likely looking to lead while (11) MAMBO KHAN is the wildcard having only raced twice, winning one, both at 1000M.

Johan Victoire has managed to coax victories out of (8) STRONG SHINE at long odds on each of his last two starts. The six-year-old, who makes his 49th start today will surely get a bit more respect from punters today and lightning could well strike three times in a row. The promising (11) HIBIKI looks to be the main danger. He was narrowly beaten by (10) BLACK POINT at this distance in July but returned the favour with interest at the end of August. (7) YES YOU CAN, could indeed come close while (5) BRAVE UP, up in class and distance today following a five-length victory over 1300M last start and the reliable but slightly one-paced (9) KYMA are others who can be involved.

Verdict: This is being billed around the Korean racing world as (8) CLEAN UP JOY vs (5) CHEONGDAM DOKKI and it’s hard to argue with that. The manner of Cheongdam Dokki’s three latest wins suggest that he potentially is the real deal and today he can prove it. Clean Up Joy will finish strongly but by then it may be too late. (7) NEW CITADEL beat Cheongdam Dokki in June’s Turkey Cup and he’s the obvious 3rd place-getter here while (6) SHAMROCKER can put a disappointing outing in the Korea Cup behind him and also compete for the places.

(6) CHAMPION KING has let down favourite backers twice in a row now but is still worthy of another go here. He beat a couple of these on his way to 2nd place last time and if he can get on the early pace here, can get it right today. Both (9) SUPER CAPTAIN and (10) GEUMTUSA are up in class having both won their latest two in very handy fashion. They each try this distance for the first time too but should be competitive with Geumtusa favoured among them. (7) CUPID FLOWER went poorly in the HKJC Trophy last start, hanging out badly in the straight to such an extent that he got sent back to trial after it. He looked good in said trial and gets a fresh start here. (3) DEOKSAMHO looks best of the rest.

Not the best class 2 you’ll see with most of them having either kicked around this level for some time or been relegated back from class 1 but that does keep it interesting for punting purposes. (2) JEOLMYOHANSEONTAEK enters with the most convincing form, a decent 3rd in a better race than this at the distance his latest effort and a similar performance should see him home on top today. Others who have done their recent racing in tougher company than this include (4) HAETBINNA and (11) MENI MUSIC and both should be involved at the business end here while (1) BINGO STAR and (6) DONGCHONUI GUY are others who could improve.