It’s that time of year again. All 10 races at Busan will be beamed to Australia on Good Friday. We’ll have a runner-by-runner guide to every race on Thursday but in the meantime, just as last year, here are some general things to be aware of about racing at Busan.

For part of the day, Busan will be the only thoroughbred meeting

The Track: The track surface is sand. There is often a lot of kickback and as a result, horses tend to wear plenty of headgear, usually pacifiers and jockeys give one another plenty of room. Due to the nature of the surface, when it is wet, it usually runs faster. There is an inner and outer track as well as chutes for races over five furlongs and a mile. 1800M races start on the inner track and move to the outer track for the finish. 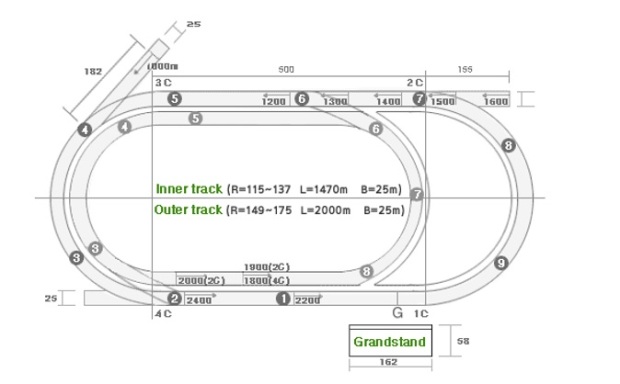 Races: There are six race classes at Busan. Class 6 is for maidens and uses set weights. Classes 1-5 are separated by rating and are handicaps. Classes 5 & 6 are exclusively for Korean-bred horses, imports must start at class 4.

Tab number and barrier number are the same and jockeys wear a cap that corresponds with their number (number 1 always wears a white cap, number 2 yellow, number 3 red etc.)

Again, due to the track surface, a lot of horses like to run on or very close to the pace so starts can be quick with a lot of jockeys trying to get a prominent early position. They are not allowed to shift inwards until 100M after the start which can sometimes (but not always) be a hindrance for wide draws at sprint distances.

Jockeys and Trainers: The top 10 in the 2017 Jockey and Trainer Premierships (starting on January 1st) currently look like this:

As in many jurisdictions, there can be a big gap in ability between jockeys. Foreign jockeys at tend to do well. There are currently five foreign jockeys at Busan and four of them are in the top 10 in the Premiership. Former Cypriot Champion Marios Mina is currently among the most in-form at the track. Among the top ten jockeys, Francisco Da Silva and Ham Wan Sik are suspended on Friday.

Australian Peter Wolsley leads the Trainers’ Premiership. The Bendigo native is in his 10th year in Korea and is currently two winners ahead of perennial champion trainer Kim Young Kwan. South African Bart Rice and Ireland’s Thomas Gillespie also maintain strong strike rates and are in the top ten. A fourth foreign trainer, Kiwi David Miller, is just becoming established at Busan and has started to get results in the past couple of months.

Favourites: Although there have been upsets of late, favourites do oblige on a regular basis. When looking at the Korean odds, it is important to remember that in Korea, punters overwhelmingly favour exotic bets with the quinella and the trio being the most popular. The regular win and place pools are comparatively small so while those pools will generally be accurate in terms of who is favourite or 2nd favourite, they may not tell the whole story the further down the board you go.

General: In Korea, the betting pools close 30 seconds prior to the advertised start time and the loading process begins then. As a result, races usually jump exactly on time.

Full preview of all 10 Friday races to follow in the next 24 hours.