In what turned out to be a repeat of the Minister’s Cup, Rock Band led home stablemate Triple Nine and Korean Derby winner Yeongcheon Ace to score a commanding victory in the Owners’ Cup at Busan on Sunday afternoon. 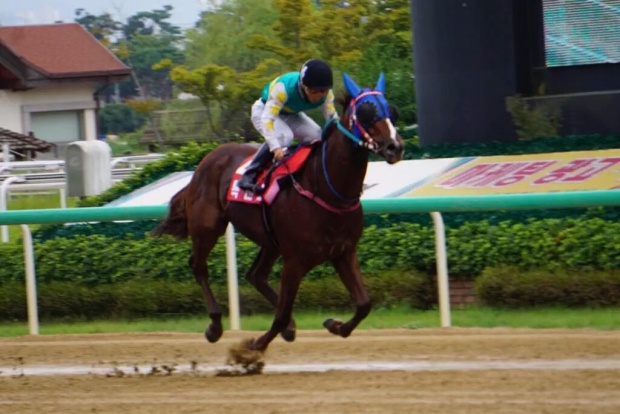 In the final leg of the Triple Crown at Seoul in July, Triple Nine had been sent off as the odds-on favourite with Rock Band fourth in the market. With Triple Nine, 2nd in the Derby and the Minister’s Cup, having finally got a Stakes race win in the Gyeongnam Do-Min Ilbo Cup in August, he was favourite again ahead of Success Story and with Rock Band third choice.

Once more, Rock Band made a mockery of that. Success Story, showed the way early on but Rock Band was always very handy and took things up entering the home straight. From then on the result was never in doubt.

Under jockey Kim Yong Geun, Rock Band ran on to win by just under two lengths with Triple Nine and Yeongcheon Ace chasing him home to complete an identical 1-2-3 to that in Seoul in July. 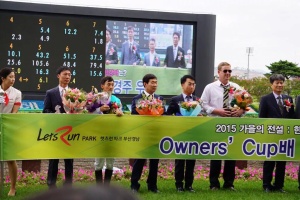 It was Rock Band’s 6th win from 7 career starts, his only defeat coming when he got a dreadful trip in his first try around two-turns in June.

A full-brother of Indie Band, the 2013 President’s Cup and Grand Prix Stakes winner, Rock Band didn’t race as a 2-year-old but now looks the pick of his crop. Hopefully, he will return to Seoul to attempt to emulate big brother in the President’s Cup later this autumn.

It was another solid performance by Triple Nine in 2nd. He has now raced 10 times with 6 wins and 4 second places. He too is trained by Kim Young Kwan, Busan’s top trainer and just like the winner, is by Ecton Park. The 1-2 was another triumph for Isidore Farm, where Ecton Park stands

* Elsewhere over the weekend, the Seoul Racecourse track-record for 1700M fell for the third time this year. The capital’s track – quicker than ever in recent months – was racing extremely fast following a storm on Saturday morning. Perfect Clone (Exploit), having broker the Korean-bred record for five furlongs earlier in the day before Special Joy (Kitten’s Joy), under Djordje Perovic, took a second off the previous best set by New White Socks in July, in winning the 1700M race 9