Joe Fujii marked his return to the saddle with a winner but it was Peter Wolsley who stole the show among the foreign ranks at Busan on Friday, sending out four winners on the day. 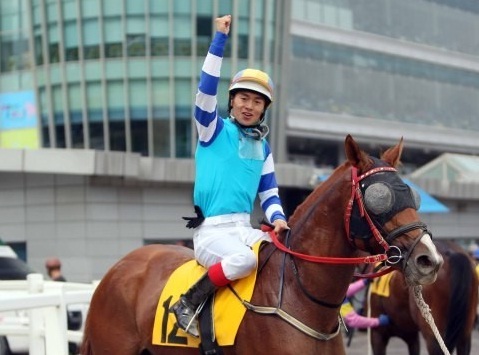 Joe Fujii was back with a winner today (KRA)

Fujii, returning after a five-month layoff, started well when guiding Wonderful Star to a creditable 3rd place in race 1 and was then 2nd on Sky Sun in race 4.

He had to wait until race 8 to find the winner’s circle though, riding favourite Vicar Gold to a comfortable 5-length victory.

By that time, Australian trainer Wolsley had already saddled two winners. Debutant Cheonji Park was impressive, making all to claim race 2 before Choedae Gangja triumphed with a similarly front-running victory in race 7.

Next up for Wolsley was Baksuchyeo, who in landing his 5th win in 8 starts, handed the highly-rated filly Top Admiral her first ever defeat in race 9. Cinderella Man completed the four-timer in race 10.

Feature race of the afternoon went to 8/1 chance Grand Teukgeup. This afternoon’s winners essentially assure Wolsley of 2nd place in the Trainers’ Championship behind the Kim Young Kwan stable. As for Fujii, despite missing almost half the season, he still lies in 7th in the Jockeys’ Championship.

Both Fujii and Wolsley will be back at Busan for more on Sunday.