On Sunday afternoon at Seoul Race Park, Charming Girl was saddled up, led around the paddock and cantered down to the start of race 6, a 7-furlong class 4 event for Korean-bred horses. Then, just as had happened on all of the 95 previous times she had gone through this process, she entered the starting gate, ran as fast as she could and was beaten. 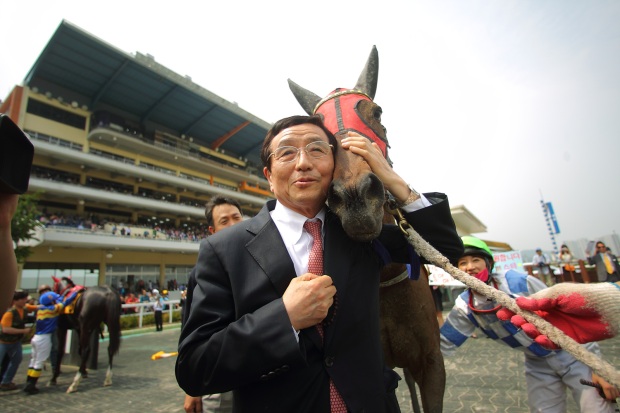 Charming Girl with owner Byun Young Nam after her 96th defeat. Jockey Yoo Mi Ra, who has ridden her 76 times, looks on

In finishing 9th of 11 and taking that sequence to 96, Charming Girl broke the Korean record for longest consecutive losing streak. The previous holder of this dubious honour was a New Zealand bred gelding named Dang Naru (Ivory Hunter), who went through his whole career of 95 runs without a victory between 1995 and 2000.

Dang Naru did, however, manage to record one 2nd place finish. Charming Girl’s best finish is 3rd, a position she has achieved on eight occasions.

Charming Girl [Pacific Bounty – Tweddles (Golden Juggler)] made her racecourse debut in January 2008, finishing 10th of 12. She would perform in similar fashion for much of the year, until in October, she broke into the money for the first time, with a 3rd place finish over 6 furlongs. Two months earlier, she had been ridden for the first time by newly qualified apprentice jockey Yoo Mi Ra. Yoo has since ridden her on a further 75 occasions which works out as almost exactly 10% of her total rides to date. It is no coincidence that her win ratio is one of the lowest of all jockeys at Seoul.

Indeed, just as Yoo Mi Ra’s figures do not necessarily do her justice, so Charming Girl is not a terrible racehorse. However, under Korea’s strict class rating system, horses who are talented to a certain extent but reach their limit, have nowhere to go. Once a horse goes up on class, they can never be dropped down again. Over the course of her career, Charming Girl has managed to amass enough prize money – around US $50,000 to date – to be promoted first to class 5 and then to class 4 where she remains. Not fast enough to win, but never able to return to a lower level where she might be competitive.

It is a system that does provide extra security for betting integrity and for ensuring that the majority of uncompetitive horses are retired but it is also one that leaves many racehorses facing an uncertain future once they have reached a level where it is impossible for them to win.

Charming Girl won’t have any problems. Her owner Byun Young Nam thinks the world of her and has announced his intention to keep running her so long as she is sound – and with no injuries or illness in five years, she perhaps is the soundest horse at the track – with a comfortable retirement to look forward too. Byun was on hand in the unsaddling enclosure after Sunday’s race to welcome his mare back and to pose for pictures.

In Korea especially where purses are high but ownership isn’t something to show off in polite society, racing is about winning. Charming Girl’s career has been about anything other than winning. In 2011, with 60 defeats already under her belt she, alongside the vastly more successful mare Luna, who nearly died aged 2 before coming back from injury to win several Stakes races, was featured in a campaign to promote ownership. The message owner Byun was passing on was that you don’t have to win to have fun.

If every horse was like Charming Girl, we wouldn’t have much of a sport, however, having been a popular fixture of the Seoul track for the past 5 years, she deserved her moment in the spotlight on Sunday. She should break the 100 by the end of summer.