Grand Prix Stakes champion Gamdonguibada (Werblin) makes her 2nd appearance of 2013 as she heads the field in the feature race at Busan this Friday. 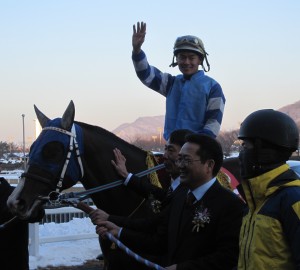 The 4-year old filly should have too much quality for the likes of Viva Ace (Macho Uno) and Prince Kingdom (Roar Of The Tiger) in the 1900 metre handicap. which is the final race at Busan on Friday afternoon.

At Seoul, the pick of the action is on Sunday. Tough Win (Yonaguska), the 2011 Grand Prix winner headlines the feature race – which is also the last of the day – in which he faces a couple of dangers, including the well handicapped Aussie up and comer Sydney Jewelry (Lion Heart) and the exceptionally poorly handicapped KRA Cup Classic winner Sing Sing Cat (D’Wildcat), but should come out on top.

Earlier on Sunday, however, a horse who should eventually be meeting Tough Win will be on show. Feel So Good (Ft.Stockton) has won both his races in Korea since returning from a successful spell in the United States and will be the overwhelming favourite to continue his steady progression up the ranks as he faces class 3 opposition over 1800 metres in race 9.