Saturday at Seoul saw Kim Hae Sun add to her reputation as one of Korea’s most promising young jockeys as she rode a pair of winners in the monsoon rain. Having partnered favourite Nice Active to victory in race 7, she then scored in the first of co-feature races on three-year old colt I’d Rather B Lucky (Gibson County). 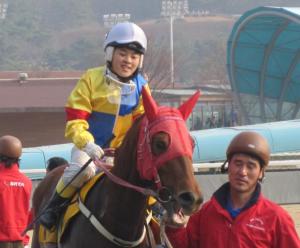 Kim, who debuted two years ago, has now ridden 26 winners from 450 rides. There was also a rare winner for Kim’s fellow female rider Lee Ae Li, who claimed the last on 9/1 shot Victory Camp.

Sunday at Seoul sees the Sports Seoul Stakes. It’s one of the biggest trial races for the Korean Oaks which will be run at Busan in August. Ten fillies will line up for the race which will be run over 1700 metres. Here’s a run down of all of them all with race records and jockey – all are Korean bred:

1. Seungniuihamseong [Vicar] (7/3/2/0) – Choi Won Joon
Has won three out of her last four including last time out over the Oaks distance of 1800 metres. She will be the clear favourite.

2. Gieongnal Geunal [Menifee] (4/1/0/1) – Yoon Tae Hyoug
Well beaten behind Event Queen last time out and will be an outsider here.

4. Allegrissimo [Bon Vivant] (7/2/3/0) – Moon Se Young
Came close to Seungniuihamseong last time and is likely to be one of her main rivals here.

5. Firenze [Yankee Victor] (10/3/1/0) – Oh Kyoung Hoan
Showed promise earlier this year but struggled over this distance in her last race.

6. Hwaryeohansesang [Perfect Vision II] (2/2/0/0) – Park Tae Jong
The unknown quantity in the race. Her two wins have been at five and six furlongs but if she gets the trip, she could be a factor.

7. Mustang Queen [Concept Win] (6/3/2/0) – Cho Kyoung Ho
Possibly the biggest danger to the favourite. She knows how to win and ran well over 1700 metres in her last race.

8. Sen Girl [Strodes Creek] (10/2/2/3) – Kim Ok Sung
Could the last crop of Strodes Creek include a Stakes winner? He’s got three in this race Sen Girl is the most useful of them and while she is without a win in three, they have been against good horses. Also has no problems getting the distance.

* And here’s what’s happening when and where: