It was so easy. Tough Win, who had been beaten for the first time in the Grand Prix at the tail-end of last year and then suffered a shock reverse at the hands of Baekjeonmupae in his season debut, today returned to the winner’s circle in emphatic style. In doing so, he handed his trainer, Shin Woo Chul, his thousandth winner of a twenty-eight year career. 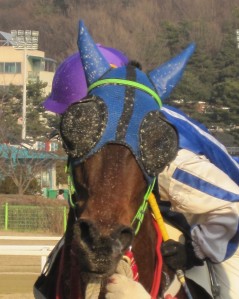 Cho Kyoung Ho dismounts from Tough Win: Sand in his pacifiers, another victory in the bank

As soon as Cho Kyoung Ho asked Tough Win [Yonaguska – Maggie Mae’s Sword (Sword Dance)] to take control of proceedings 1000 metres from home in the feature handicap at Seoul Race Park, it was over as a contest.

The four year old needed no encouragement to almost instantly open up an unassailable lead. With a furlong to go, they were out of sight and jockey Cho spent the closing stages thanking his horse and acknowledging the achievement of one of the track’s longest standing trainers.

By the time they crossed the line, they were only four lengths in front but it might as well have been forty, so comprehensively outclassed were the rest. Trainer Shin met Tough Win in the winner’s circle to be photographed with the horse who is as good as any as he has trained in a career that has seen a Derby winner, Haebidongja in 2003, multiple Stakes winner Super Pala in the 1990’s and Weekend Glory, a prolific winner a few years ago.

Tough Win is the holder of both the Busan Metropolitan and KRA Cup Classic as he assumed the mantle of Seoul’s top horse from Dongbanui Gangja last year. However, the Korean Stakes schedule requires a horse to be in top form all year round. Tough Win will surely be back for another crack at the biggest one of all, the Grand Prix, in December. It’s a race that has so far eluded his trainer. Busan’s Mister Park is currently Korea’s champion. Hopefully he will have to defend against Tough Win this year.

On a bright but chilly day, there was action on the Triple Crown trail. Breeders’ Cup winner and champion juvenile of 2010, Sun Hero grabbed a second consecutive win at two turns in race 9 to put himself firmly in consideration for the Classics. It was another easy win for Cho Kyoung Ho who was standing in for suspended Moon Se Young on the Menifee colt who, if all goes to plan, we will next see on the firs Sunday in April down at Busan for the KRA Cup Mile, the first leg of the Triple Crown.

Finally, a word for Seoul’s only foreign jockey. Hiro Hamada has gradually seen his opportunities dry up over the past few months, however, the Japanese rider took his chance on 10/1 Skyfull in the last race today, to score his first win of 2011.

Racing returns to Seoul on Sunday when there are eleven races from 11:10 to 18:00. However, it is a Busan where the focus will be. Down south there are six races from 12:30 to 16:30. In race 5, Grand Prix champion Mister Park will be seeking his thirteenth consecutive win, while one race later, Minister’s and President’s Cup champion Dangdae Bulpae takes on the imports in a big handicap.