Florida Sox To Defend Crown / Larrycat, the “Daero’s”, Ace Galloper all in action!

One year ago this weekend, Florida Sox stormed to victory in the Segye Ilbo Cup. No-one expected then that today she would be able to return to defend her title in 2011. 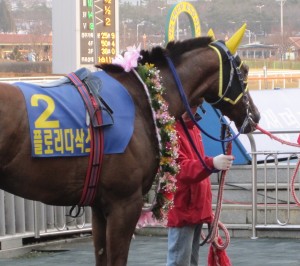 Defend it she will, however, as injury ensured that much of the rest of her 2010 would be spent on the sidelines making her unable to make what looked like being smooth progress out of class 2 racing.

Returning from her long lay-off in with a win in December, Florida Sox (Woke Up Dreamin) has had another two months to prepare for a tilt at a second Segye Ilbo at Seoul Race Park this coming Sunday and improve on her career record of four wins from six starts.

She’ll face thirteen rivals in one of very few Stakes races specifically for overseas bred fillies and mares. Some experience mares will take on some up and comers such as Geumbi (Ecton Park) who has four wins from seven starts and Kkakjaengi (Put It Back) and Blueband Mama (Purge).

Saturday at Seoul sees Larrycat (Fantasticat) make his season debut. Now four, he’s not been a prolific winner but finished third behind Tough Win and Dongbanui Gangja in the KRA Cup Classic and then beat them both when running second to Mister Park in the Grand Prix. 2011 could be his year and he goes up against the likes of KJ Khan and Jumong in Saturday’s feature race.

Classic possible Double Light goes in race 10 on Saturday while after the Segye Ilbo is over and done with on Sunday, Ace Galloper, with ten wins from fifteen starts, will head the field for a big class 1 handicap. Former Champion mare Lucky Mountain will join old-timers Gi Ra Seong and Hongji as well as New Year’s Stakes winner Andy’s Runner in trying to beat him.

Some stars will also be on show at Busan this week. 2010 Korean Derby winner Cheonnyeon Daero will be looking for three straight wins in Friday’s feature event while on Sunday the other “Daero” (it means “Road”), the fearless Yeonseung Daero once again takes on the overseas imports in the big race.