Some reputations were left intact but some were in question at the end of a busy afternoon at Seoul Race Park. While Money Car continued his stately progress through the ranks, fellow hot property Ace Galloper went down to a shock defeat to break a five race winning streak.

Stepping up to class 2 and going half a furlong further than in any of his previous outings, Ace Galloper was nevertheless sent off the 1/5 favourite. Coming round the final bend in third place on the shoulder of the leaders, he looked set to justify that price and go clear. To everyone’s surprise, however, while early pace-setter Good Diva did indeed start to fade, second placed Brothers did not. Instead the four-year old kicked on and tied up with Ace Galloper in the home straight. 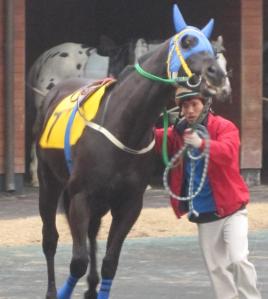 On the line, the older horse got the better of the potential superstar by half a length to record an unexpected win. For Brothers, it was a fourth win from thirteen starts. For Ace Galloper [Chapel Royal – Explicitly (Exploit)], who was causing mischief in the paddock before the race, it was bad day.

There were no such problems in race 8 for classic hopeful Money Car. Park Tae Jong waited until the final furlong to ask the three-year old to make any effort but when he did, the colt abruptly jumped away from the field and was a confortable three-length winner. Since finishing second on his debut, Money Car [Newsprint – Pinocchio (Big Sur)] has now won five in a row.

Later, in the gathering gloom of a grey, waning afternoon, Bulpae Gisang went to post as the odds-on favourite in the feature handicap. He would be the second odds-on favourite to go down on the day though as he could only third place with Haengun Daewang leading from gate to wire. Four-year old Bulpae Gisang is generally recognised as the second best horse running at Seoul. Not on today’s performance.

Finally in the last race, it was the turn of another three-year old hopeful Dongbang Rose [Volponi – Night Mary (Strike Gold)] to put her unbeaten record on the line. She came through with no problems whatsoever, scoring a two-length victory over seven furlongs.

Down at Busan, there were co-feature races. Australian-bred Cheonseungmanseung [Way of Light – Mysterious Ransom (Red Ransom)] – a horse whose name looks much shorter in Korean than it does in English, took the first of these, a mile handicap for foreign bred horses, while an Australian trainer, Peter Wolsley, took the honours an hour later in the domestic event. His five-year old gelding Khaosan came home three lengths ahead of Isidae Gangja and Golden Appeal.