On the day his rival Dolkong landed back in Korea, Cheongdam Dokki put down a marker by returning to the winner’s circle in emphatic style as he successfully retained the Herald Business Trophy at Seoul Racecourse on Sunday afternoon.

Dolkong, winner of the Curlin Handicap and 3rd in the Al Maktoum Challenge R3 at the Dubai World Cup Carnival before being well-beaten in the World Cup itself, has somewhat usurped Cheongdam Dokki, who has both beaten and been beaten by since in several meetings since they started racing each other as juveniles in 2016. The returning hero touched down at Incheon Airport early Sunday morning and was safely ensconced in his quarantine stall by the time the Herald Business came under orders on a sunny Spring afternoon.

Making his second start for trainer Luigi Riccardi and piloted by Antonio Da Silva, the five-year-old Cheongdam Dokki was sent off a prohibitive favourite for the 2000M Listed event. He duly obliged, putting his rivals to the sword in the back straight before cruising home for an easy five-length victory.

After finishing 2nd in the Grand Prix Stakes in December, Cheongdam Dokki had three months off and moved barns in the process. He wasn’t at his best on his return in the Owners’ Association Trophy over 1200M a month ago but looked on fine form here, registering a fast time for the distance under 59kg. The up and comer Moonhak Chief ran 2nd, just pipping Shamrocker. 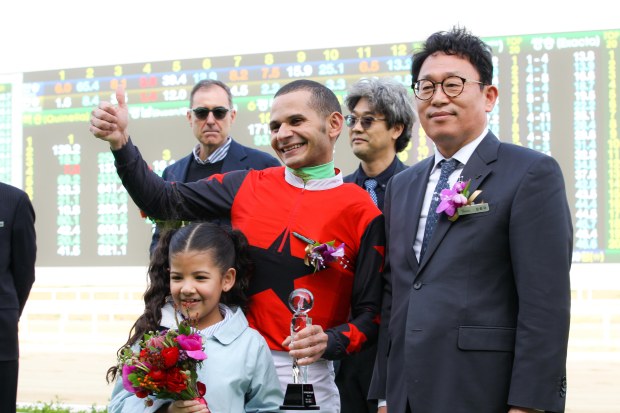 It was a thirteenth win for Cheongdam Dokki on his twenty-second career start. He had only once run faster at the distance, when winning the KRA Cup Classic in 2017, but that was when carrying just 55kg.  It was faster than any of Triple Nine’s four President’s Cup wins and in big races, only Dongnanui Gangja, in the Owner’s Cup in 2009 (when that race was at 2000M), has actually gone quicker and that mark is still the track record – but the track was wet and fast that day.

Cheongdam Dokki is back in serious business.