Blossom season is in full flow and we’d best make the most of it as it’s predicted to rain on Sunday. The Cherry Blossom Festival at Seoul Racecourse continues over the weekend and there is plenty of racing too. Saturday sees 11 races from 10:45 to 18:00. Here are the previews: 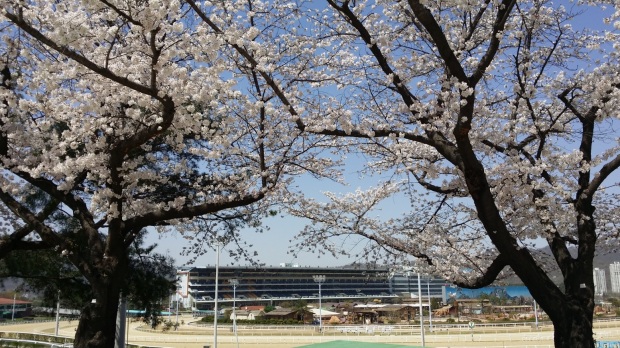 (5) HANYANG NURI ran on very well to win on debut over 1000M back in December. She returns here having had four months off up in class and distance but with solid claims. (3) JEMA TEUKGEUP is up in class and distance following a 2nd place and a comfortable win over 1000M from her first two outings. She’ll be on pace here and could repeat. (4) TAEPUNG EYES is experienced at this level and was a solid 4th last time out in similar company, which he can build on today. (1) MISSILE CANDY steps up in trip for the first time and can improve while (10) KAILLUM YEOJE will try to challenge Jema Teukgeup for the early lead and can at least be in the placing frame.

Three-year-old maidens only here. (3) TIZ ROSE and (4) VICTORY MAY both finished 4th on their respective debuts and both return after quite lengthy spells out (16 and 12 weeks). Both should go close but for the pick well go with (10) SPEED BELLE. He’s raced three times so far and drops back in trip following a 5th place over 1300M a month ago and can push on here. He’ll have to come around from the outside to get to the front but is capable. We’re scraping around with the rest a bit but (9) MOONHAKCHEETAH offered a few hints of improvement last start and could build on it here.

More three-year-old maidens with eight of the twelve having raced before. (4) PRIME QUEEN was a much-improved 2nd on what was her second career outing on March 2nd. She can settle just behind the early speed and finish strongly. (11) CHEONNYEONUI BARAM has a 3rd and no fewer than four 4th place finishes among six starts so far. He drops back in trip today and should be looking for a career-best result. (8) WONDERFUL PANGPANG also drops back in distance having weakened in her latest two, both at 1300M and can get closer. There are four first-time starters and of them, (2) HAWK HAENGJINGOK and (5) GOLDEN ANGLE both have trial wins to their name and can go well first-up.

A few standouts here. (5) BINNANEUN RUBY ran a close 5th at this distance on March 23rd in very similar company to this. She is a seventeen-race maiden but has a decent shot of changing that here. The two main challengers both try this distance for the first time. (4) MASON has improved across three starts so far and ran 3rd at 1300M last start. The trip should suit, and he can match or better that finish today. (11) BAEKSAEK GWANGCHAE took a couple of goes to figure things out but has been 3rd and 2nd in his latest two and he too should appreciate a bit more distance today (1) PUNGMUNEURO has been inconsistent but is not completely devoid of ability and she too attempts two turns for the first time. (8) REIGN looks best of the rest.

Since returning from six months off, (9) ICHEON SSAL has shown some signs of returning to form. He ran 2nd at this distance in early March and may have finished better than 5th last time had he not had a poor start. Today could be his day although this is a desperately open race. (5) ECHO GOLD remains winless after fourteen attempts but has been knocking on the door of late and could go through it today while both (3) RISING SOCKS and (4) CHEONGDAM TIGER are better than their respective latest outings suggest, and both should be involved here. (8) SUN START is another maiden and steps back up in trip with recent form reasonably encouraging.

(4) FIRENZE HILL is set to be a warm favourite here. He’s run 3rd and 2nd in two starts at this level since getting his maiden win back in December, being beaten both times by better than what he faces here. He can lead all the way. (6) QUEEN FORCE ONE enters having won somewhat unexpectedly at class and distance on March 16th and she obviously warrants respect today. (12) ACE TRIPLE came home 4th in that same race, his first try at this class, and he has claims to get closer this time. (1) FINAL STORM and (10) FULL MOON SKY look best of the rest.

Eight imported maidens go here. (5) DAEGUN CHEONHA will be a pretty strong favourite coming in as he does with two 3rd places followed by a very close 2nd, just losing out by a head last time at this distance. From gate 5 he will be on pace early and should make no mistake today. (2) THE SPIKER has finished no worse than 4th in four attempts so far and should be looking to match the 2nd place he scored on debut – he’ll aim to go with the favourite early. (3) MUNHAK WINNER and (4) FIGHT TODAY both showed promise on their respective debuts while (8) LIL’ PATRON too ran well on debut back in February and though he disappointed on his return three weeks ago, can be given another chance here.

A winner of four from five so far, (9) RAPIDOCUS is up in class today off the back of a six-length score over 1700M on March 2nd. He steps back in trip and has every chance of making all once more. Another up in class pair, (2) GOLDEN DIAL and (7) CHEUNGDAM GENIE both look to have more improvement in them and look best equipped to challenge the favourite. Both are up to this distance for the first time. (5) JANGSAN BEARS drops back in trip and can aim for the places while (12) DORAON NALRI raced a touch ungenerously last start but still managed 5th and can aim to at least repeat today.

(1) BEST LINE has two wins and two runner-up finishes from four outings so far, the latest of which was his first try at this distance. He steps up in class today but looks in good stead to win again. (9) DO KKI BLADE put in a very promising juvenile campaign, finishing 2nd to Dae Wan Ma in the Gwacheon Governor’s Cup. After running 7th in the Breeders’ Cup he had a wind operation and returns for the first time since, having trialled up encouragingly twice, most recently last Friday. He has a chance. (7) DUMANGANG and (6) STRONG RUNNER came home 2nd and 3rd when they raced each other at class and distance a month ago. Strong Runner can overturn that form today. (2) UP LIGHT is another in at least the placing hunt.

(4) GEUMBIRANG toughed out victory by a neck at this class over 1800M on March 3rd. He is giving weight away to every other horse here, but he has the ability to overcome it and can win again. Should the impost prove too much, (7) MEGALIOS is the one to take advantage. A winner of three of his last five, he’s up in class today having scored over 1700M last time. It’s his first time at 1900M today but with a nice light weight to carry, he can win. (1) SMART PARK and (2) YESANGBAEK SEUNG both come in with recent form reading well while (6) O.K. YEONDAB is another in the hunt.

Six of these raced each other at class and distance on March 16th. (7) YAHO SMART CAT finished the best of them that day in 3rd place and he is favoured to prevail over them once more, coming home on top this time. Of the ones he beat that day, (10) MAGIC TEN probably has the most realistic chance of overturning the form but he’ll face stiffer challenges from the likes of (1) STORM RYKER and (11) GRAY SOCKS, both of whom went well last start. (2) K KING is up in class after a good win over 1000M last time and is another who can challenge for at least a place.