A typhoon is due to slam into the Korean mainland any time now. Busan should get plenty of rain but the worst could well be over before Friday racing gets underway (though there is likely to be a lot of water on the track). There are 11 races from 14:30 to 21:00 and Minister’s Cup winner World Sun is due to return to his home track for the first time since winning the final leg of the Korean Triple Crown at Seoul last month. 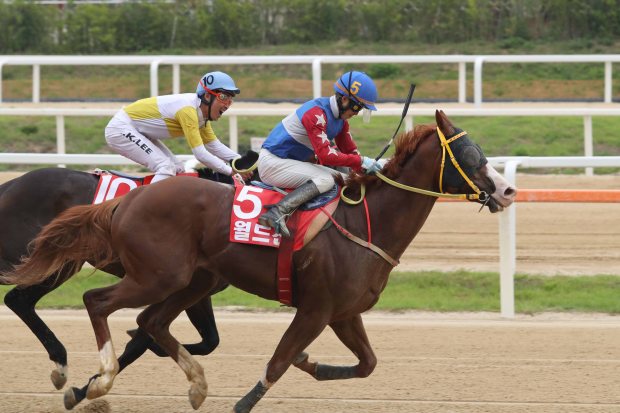 Maidens to kick things off as usual and (8) B.K. UNO will be hard to beat here. True, we said that last time when she was sent off favourite in a similar race on July 27th only to lead until close to home but eventually get overhauled, but she surely makes no mistake today. She is the only one who enters with any form of note although (5) THE FACT managed a 3rd place at 1300M back in May and is likely to be second-favourite. (1) YEONGGWANGUI STAR and (4) ON DAY too have shown some glimpses of ability. The other one that jumps out though is (3) YEONGWON CHAMP. One of two debut-makers in the field, she’s a half-sister to a couple of useful performers and the trainer/jockey combination is to be noted as well. She trialed up adequately and this is a great race to debut in.

This looks a trickier maiden. (5) TAMNA MENTOR just about gets the verdict having shown a little more than most in her latest two efforts, running 4th and 5th at the distance in competitive times and a similar performance should be enough to win. (7) CHEONJI KINGS drops back to the minimum trip for the first time after three encouraging performances at further and he’s next best. (2) MUJEOK BEAT was an improved 3rd last time and while he hasn’t demonstrated much in the way of speed, can look to repeat here. (1) ALPHA RUNNER and (6) SMART CHOICE have both only run the once with neither offering many clues, but improvement is certainly possible from one or both of them.

(8) P.K. NINE enters having run 2nd and 3rd in his latest two outings, at 1200M and this distance respectively. That leaves him requiring just one more finish inside the placings to be promoted to class 5 and he can exit the bottom level with victory here, most likely looking to lead from gate to wire. After an inauspicious debut, (9) TIME SPEC has been consistently close across five subsequent starts with two 3rd place finishes followed by three consecutive 4ths. He is a bit one-paced but he can join P.K. Nine at the front early and can beat most of these. (6) PEACE RIDER was a touch disappointing when well backed at this distance on July 13th but his form prior to that was good and he’s worth another placing chance here. (3) GURI TOWER and (7) BAENGNICHONG look best of the rest.

(2) TONGIL HANGUK debuted very encouragingly back in April running a good 3rd in a very similar strength contest to this. He has had a couple of setbacks since including some mild lameness and a brief crush with colic but he makes his return here looking very much the one to beat. He led in that debut race and could well get an uncontested lead today. They could have a very hard time getting past him. (4) BIG FOOT also debuted well, in his case all the way back in January. He looked sharp in a trial at the end of July and can be a danger first-up here. (6) FIRST VICTORY ran a good 2nd over 1300M four weeks ago suggesting that a first victory is not impossible either. (9) SERENDIPITER came even closer last time, just going down a head over this distance. That marked a big uptick in form and he can build on it today. (11) SWEEP MAN has been consistently close across his latest few starts and shouldn’t be too far away again today.

(3) QUICK MOVE was a two-and-a-half length winner on debut on July 27th. He’s up in class here but drops back slightly in trip and is well drawn to get on the early pace. It won’t be easy but he could win again. (1) BAENGYEON DAERO ran a good 4th on her first try at this level on June 29th following her maiden win a month earlier. She’s had eight weeks off since and should be a big danger here. (10) FASHION OF MARINE comes in having won his latest two, the most recent of them being at this class on July 22nd. All three of his outings to date have been at 1000M so he’s into unchartered territory today but he’s run on well in all of his races so far and should still be a factor. (2) USEUNG TICKET is another up in class, in her case having got her maiden win at the fourth time of asking four weeks ago. She’ll take a sit behind the early lead and can finish strongly. (4) BUGYEONG BOLT was a winner on debut last New Year’s Eve and after a bit of a wobble looks to be coming back into form with a solid 3rd place at class and distance at the end of July.

Can (10) GANGHAN JILJU finally get his maiden win at what will be the fourteenth time of asking? He’s come desperately close in his latest two attempts, beaten a nose and half a length into 2nd place at this class, over 1300M. He races at 1400M for the first time today although he has a 2nd place over a mile to his name as well and it could be his day. (1) WONDERFUL STORY is also in search of his first win. He’s up in class following back to back 2nd places at 1300M and should be very competitive here as he goes an extra half furlong for the first time. A host of others are up in class too including (6) EOMBEULLANG, a winner on debut at the end of last month although all look like they will need to find a bit more here. (4) CHEONHAUI KKUM perhaps looks best equipped to deal with the step up in difficulty. (5) DAEDONG GISANG and (9) NEW JACK SWING are among those with experience at this level who should go close. Both try 1400M for the first time and it may well suit.

Another very tricky contest. (3) VICAR BLADE could only manage 4th when favourite over 1400M on July 29th. He steps up in distance to a mile for the first time today, should be on the early speed from the gate and is worth another chance. (10) ARCH NARAE enters having beaten three of her rivals here on her way to 3rd place at class and distance on June 22nd. While she was a long way behind a good winner that day, she was just edged out of 2nd place by a neck and has every chance of going better here. (1) POWER BOW and (9) ONNURI GANGJA were among those beaten by Arch Narae in that race but both can get a little closer today. (7) JEONGSU SIDAE has also been beaten by Arch Narae but is a winner at this distance and can play a role here.

(5) JEWANGUI HUYE returned from eight months out to run a good 3rd at class and distance on July 22nd. He should have come on for that run and can go even closer here. (3) SEUNGJA BONSAEK and (4) OHO DAEJANGGUN enter having both won somewhat surprisingly at this level over 1300M on their respective latest starts. Both carry a bit more weight today but both should be close once more. (2) CHARYONG has plenty of experience at this level and enters with his recent form reading well while that’s true too of (6) GRAY STORM, beaten by Oho Daejanggun on his most recent start but 2nd at class and distance in early July.

A winner on debut in May, (1) GIJEOGUI JEOKTOMA was sent off as favourite for both his tries at class 5 far but came up short in 2nd place on both occasions. Nevertheless that was enough to see his rating tick over to class 4 level and really there’s not too much for him to fear. From gate 1, he should go straight to front and, on his first try at a distance shorter than a mile, can win. (4) SINGAEBYEOK somehow remains a maiden after seven attempts but has finished runner-up in no fewer than five of them. He also finds himself up in class and has every chance of getting at least another 2nd place here. (7) QUEEN OF CAPTAIN races for the first time since finding things hard in the Korean Oaks. She should be far more comfortable today. (8) JAEDOYAKUI BANSEOK and (11) A PURE GOOD MAN, the latter up in class and slightly in distance following a good win at 1200M last time, are others to take into account.

(4) WORLD SUN won the Minister’s Cup, the final leg of the Korean Triple Crown, at this distance in Seoul on June 17th having previously run 3rd in the Cup Mile and 5th in the Korean Derby. He returns to Busan as favourite to win this “Road To G1” contest. He’ll drop to the back and finish strongly. Of course, that was his undoing in the Derby as he found the door slammed shut in his face when he finally got into top gear in the last couple of furlongs and this won’t be easy. (6) RUNNING SOCKS comes in off the back of consecutive wins, the most recent at this distance over 1800M. He tires 2000M for the first time today but should be very competitive. (3) ROCK HARD SEVEN saw his winning streak come to an end of five on his first try at this level six weeks ago. A return to form can’t be ruled out here. (5) MASTER WIN is up in class after a visually impressive eleven-length win over 1800M at the end of June. (8) BLACK SAPPHIRE and (9) ROYAL RUBY are capable campaigners and can’t be ruled out either in what has the potential to be a really good race.

After finishing 4th on debut, (6) DRAGON NINE has gone on to win his next three, all of them at 1000M. He is up in class here and up in trip for the very first time so there are a couple of question marks, but he still has every chance of winning again. (12) CLASSIC MATCH has had an interrupted career but she’s won four of the six starts that she’s managed to make including a very close 2nd last start at class and distance on July 20th with two of her rivals here well back. (3) UJU DAEWANG only beat one home in last month’s Korean Oaks but should be much more comfortable back in this company and at a sprint distance today. (9) GAME CHANGER and (10) MAJOR ALPHA are others in the hunt.