This afternoon’s sees the final stakes race of the season for fillies & mares in the shape of the Jeju Governor’s Cup at Seoul. And it has attracted a full field of sixteen in what looks an interesting, if underwhelming, contest. 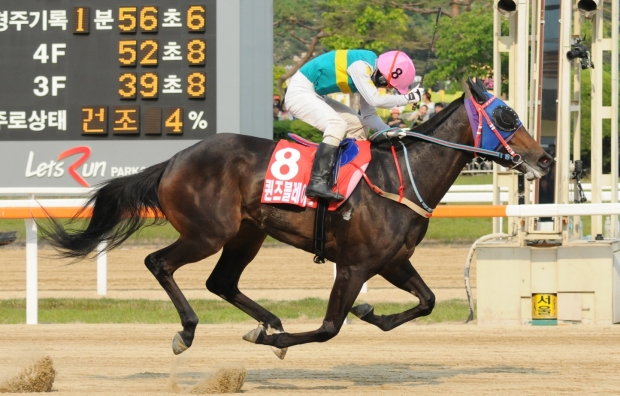 Interesting it may be but the Cup has drawn the short straw somewhat in that it falls just two weeks after the final leg of the Queens’ Tour, in which a number of the best domestic bred fillies, such as Oaks winner Jangpung Parang participated in and the lack of depth in the distaff ranks is shown up quite starkly by a line-up lacking in quality.

The 2014 Korean Derby winner Queen’s Blade returns to action in Korea after a pointless trip to the United States. She is at least fit now (had she been fit earlier this year, she would have stayed in Korea but that is another gripe for another day) and she could very well get back in the winner’s circle today under Ikuyasu Kurakane. However, stablemate Bukbeol Sinhwa, who won the Busan trial for this race last month will also be expected to go close with another Japanese jockey, Masa Tanaka on board.

Others who will be backed include Indian Star and Winner’s Marine who were 2nd and 3rd behind Bukbeol Sinhwa in that trial race and have managed to attract top Busan jockeys Jo Sung Gon and Kim Yong Geun to the capital to ride while Nozi Tomizawa is a also in town and may go well on Jokwang. Meni Money is perhaps the pick of a weak home team but whoever wins this isn’t exactly going to be a world beater.

Here is the full list of runners and riders: