A bit of a holding weekend in Korea between last week’s Ttukseom Cup and next week’s KRA Cup Mile, the first leg of the 2012 Korean Triple Crown. However, there’s still plenty to keep us occupied. 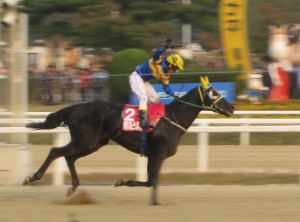 Feature races of the weekend at both Seoul and Busan are on Sunday. Ace Galloper (Chapel Royal), with 16 wins from his 23 starts heads the big race at Seoul.

Down at Busan, Peter Wolsley’s Ghost Whisper (Gotham City), with 5 wins and 3 seconds from his 8 starts to date, makes his class 1 debut in Sunday’s feature. Earlier on Sunday, promising filly Geumdda (Officer) will be aiming to make it 6 wins from 7 starts.