A colt by Forest Camp and out of the With Approval mare Fully Approved, fetched the highest bid at last week’s Jeju May Two-Year old Sale. The colt – called Myeongun Jewang – was bought for 130 Million Korean Won, a price which broke the sale record set last year by Exploit colt Champion Belt who was fourth in this year’s Korean Derby. 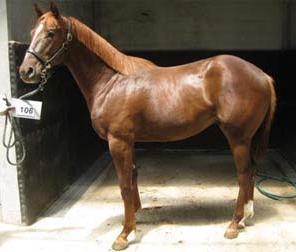 Forest Camp arrived in Korea in late 2007 and this year will see his first crop of two-year olds reach the racecourse. Fetching the second highest amount was a colt out of the mare Byenne (Jambalaya Jazz) who was in foal to Jump Start when she was imported to Korea in December 2008.

There were no fillies among the top ten lots and only two in the twenty. Menifee was the only sire represented more than once in the top ten which was as follows:

As ever, full details on all horses in Korea for both racing and breeding can be found online in the Korean Studbook. meanwhile, Fallight has a number of official appearance videos by Korean based stallions on his Youtube channel.